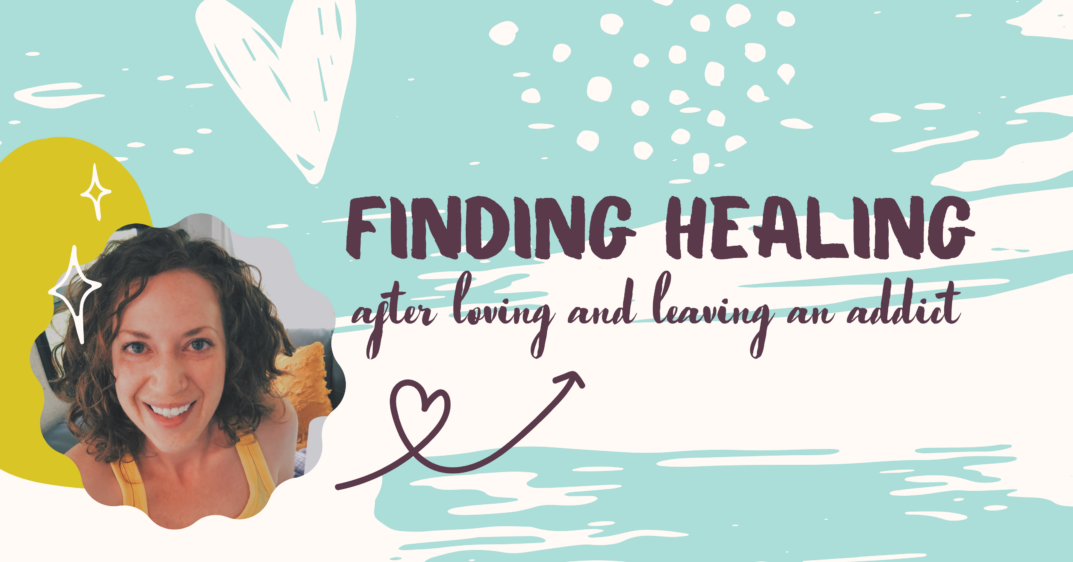 When I first started writing this post, I titled it “How I Found Healing After Loving and Leaving an Addict.” The problem with this, though, is that while God has done a lot of mending on my heart, some wounds run deeper than others.

Today marks two years and one month since I moved across the country leaving behind the man I had planned to marry. I can remember the last truly sober conversation that led to that decision. The morning after an especially bad episode he so calmly told me: “Jayme, I love liquor more than anything in the world. Including you. I don’t know if that’s ever going to change and, if I’m being honest, most of the time, I don’t even want it to.” After five years together, those words were like a dagger to my heart but a day later I don’t think he even recalled saying them.

“Jayme, I love liquor more than anything in the world. Including you. I don’t know if that’s ever going to change and, If I’m being honest, most of the time I don’t even want it to.”

When I left, the people closest to me told me that they were proud of me – but I knew the truth. Had I realized that leaving would have been the beginning of the end of our relationship, I don’t think I could have done it. I believed that if I left, he’d get sober. I was wrong.

Experiences like these can be difficult to explain to someone who has never been close to an addict. What people don’t understand is that when someone you love drinks too much, you don’t see an alcoholic. You only see that someone you care for deeply is going through what is probably the hardest thing they’ve ever experienced. If I were to walk away, I would be abandoning him when he needed me most.

I still remembered all the things I loved about the person he used to be. I clung to all the wonderful memories that filled the first few years of our relationship. And, even more, I couldn’t let go of the beautiful future I had carefully curated in my mind and daydreams.

You tell yourself that if you support them enough, if you love them enough, if you sacrifice enough, somehow, they’ll pull out of it. I mean, love conquers all right? What I failed to recognize, though, is that his addiction had absolutely nothing to do with me. It was not my battle to fight. It was a battle I COULDN’T fight.

What I failed to recognize, though, is that his addiction had absolutely nothing to do with me. It was not my battle to fight.

Now, several years down the road and looking back, here’s what I’ve learned and what I’d like you to know…

1. It’s OK to love someone and still leave them

If an addict is not putting forth any effort to become sober, there is NOTHING that you can do for them. Your mental health and wellbeing HAS to come first but that won’t mean that it’s easy.

The guilt I experienced when I was preparing to leave was unreal. Was I making the right decision? Would he be OK? Is this choice going to make him downward spiral even more? It made my insides churn and ate at me. I felt fragile and breakable.

It took a lot of time for those feelings of guilt to dissipate, but on the other side? – the relief I experienced once I had separated myself from that unhealthy life was immeasurable. I don’t think I understood the amount of stress and anxiety that I had been living in for those three years.

2. You can have regrets and still be grateful for where God has brought you and for the life you currently have

I’m going to say the thing we’re not supposed to say. I regret a lot of things about this period of my life. If I had to do it over again, I honestly don’t know that I would. You’re judging me, aren’t you??

But here’s the thing…my God is bigger than my regrets. And while I wish I had chosen a different path to learning these valuable life lessons, I’m incredibly grateful that we have a God that can take even our biggest regrets and hurts and turn them into something beautiful.

3. You need to Keep the people who love you unconditionally really, really close

Chances are, this isn’t a part of my life you’re familiar with and there’s a reason for that. I think one of the most difficult things I went through after making the choice to leave was realizing, for the first time, that I had pushed away all the people most important to me. I had just walked away from my whole life and best friend and now I felt completely alone.

It wasn’t because I didn’t want or need my beautiful friends. I was ashamed.

No matter what I was telling myself to get through the day, deep down, I knew the life I was choosing was wrong. Wrong for my mental health, wrong for my walk with Christ, wrong for my happiness. I also knew that the people who loved me wouldn’t let me get away with that. So, I built up walls – walls that I’m still working to break down.

A piece of advice. If God places people in your life, that will speak truth and hold you accountable while STILL loving you. Don’t you dare let them go.

4. You can’t shut out the memories and lock them up

The problem with this, though, is that we don’t really forget, and the time came where I had to start acknowledging all the things that had happened if I was ever going to move forward with my life.

The problem with this, though, is that we don’t really forget, and the time came where I had to start acknowledging all the things that had happened if I was ever going to move forward with my life.

So, I started journaling.

When I remembered something especially painful, I’d write it down. What did I feel in that situation? What was the lie I told myself? What is the truth I’m going to choose to claim instead?

Then I started writing down my dreams for the future. A future that no longer included him. And THIS was when I began to reclaim my life.

5. There’s no time limit on the healing process

The healing process is different for everyone and can be complicated when you’ve experienced trauma.

For me, the mourning process for my relationship came first. But once that layer was peeled back, I realized that there were some things I experienced during this period of my life that may take months, years, and even a lifetime for God to heal completely in me.

6. Love yourself how you want to be loved in a relationship

You know how people say that you’ll attract the relationships you think you deserve? Guess what? There’s truth to that. I had to recognize that I had not been kind to myself even before our relationship began. I often struggled with a lack of confidence and insecurity…never feeling like I was enough.

Since moving on, I’ve made an effort to do all the things for myself that I hope my future husband will lovingly do for me. I make sure the lights are on outside of my tiny house when I know I’m going to be home late. I prep meals so when I get home I can just relax. I take myself on dates. I journal and I’m honest with myself about how I’m feeling. I’m gentle with myself. I take myself on vacations, even little ones when the budget is tight. I buy myself jewelry that I really love. I leave myself kind notes on the bathroom mirror and in my favorite books.

The next time I meet someone that I am considering building a life with, I’ll be able to compare the way he treats me to the way I’ve treated myself. I will have set a standard.

Perhaps you find yourself in a situation similar to my own. I know there are a few things that I really needed to hear, so I have a feeling you probably do too…

Lovely, life isn’t supposed to be this way.

You aren’t to blame.

It’s not your job to fix him.

You CAN’T fix him.

You have a purpose.

You are stronger than you believe.

AND THERE IS A LIFE BEYOND THIS!